GGB Continues to Expand Its Role with the Panama Canal

Annual traffic through the Panama Canal has grown from 1,000 ships when the canal first opened, to nearly 15,000 ships in 2014.

THE PANAMA CANAL OFFICIALLY OPENED IN 1914 TO LINK MARITIME TRADE BETWEEN THE ATLANTIC AND PACIFIC OCEANS.

During that time, annual traffic through the canal has grown from 1,000 ships when the canal first opened, to nearly 15,000 ships in 2014. In addition to this overwhelming growth, the Panama Canal could no longer accommodate large, modern ships. For these reasons, the Panama Canal Authority recently underwent the largest expansion project since its original construction.

In June 2016, the Third Set of Locks project, as it is also known, completed construction of a new set of locks on the Atlantic and Pacific sides of the waterway, creating a third lane of traffic and doubling the cargo capacity of the waterway. The expanded canal provides the world's shippers, retailers, manufacturers and consumers with greater shipping options, better maritime service, enhanced logistics and supply-chain reliability.

To support the expansion, GGB developed GGB-DB® cast bronze hemispherical bearings, a new type of pintle bearing for refurbishment of the miter gates in the Panama Canal’s lock system. Among the requirements specified for the new hydro bearings were 25-year service life, abrasion-resistance, underwater operability and ease of assembly and operation. In addition, the U.S. Army Corps of Engineers stipulated the use of self-lubricating bearings rather than greased bronze bearings to eliminate water contamination. 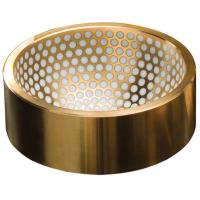 GGB-DB® cast bronze bearings play a crucial role in delivering reliable performance while protecting the existing ecosystem. Their unique design provides trusted and consistent movement and they are grease free – eliminating unwanted contamination to the environment.

GGB had to submit certified, third-party test results to have its bearings considered for the project. After correlating the specified needs with the functional requirements of the bearings and extensive study of various materials, the company selected an advanced polymer resin with PTFE fibers.

GGB developed a GGB-DB® cast bronze hemispherical bearing lined with the new material in the form of embedded, solid lubricant plugs protruding above and covering 70 percent of the surface area.

This configuration not only allowed for efficient flushing of the bearing via integral cleaning grooves, but also enhanced its structural integrity and facilitated its production.

Quarter-scale prototypes were submitted to Powertech Labs for testing, which yielded excellent results in terms of static/dynamic friction, axial/horizontal direct wear and temperature resistance. Full-size bearings were then produced for finite element analysis, which confirmed that contact pressure and shear force were well within their mechanical properties with a sufficient margin of safety.

In addition to hydropower applications, the new bearings are also suitable for use in bridges, telescopes and other applications involving pivoting movements and requiring high axial load resistance. 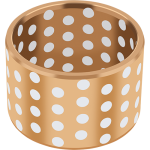