Per definition, a coating is a covering layer that is applied to a surface of an object (called substrate) that may have different functions, such as: decorative, functional, or both [1].

Examples of Surface Coatings are:

For polymer coatings to be built on a substrate, they start out in the form of a paint that is applied conformally to the part’s geometry. The paint is then dried and cured to form the final functional coating.

By combining our tribological, engineering and polymer science expertise and our legacy of innovation in plain bearing technologies, we created our line of TriboShield® standard tribological polymer coatings for a wide range of industrial applications. Able to be applied to nearly any surface for almost limitless potential, our range of TriboShield® polymers deliver improved tribological properties and are formulated to help meet these challenges and revolutionize component design and manufacturing.
Offering the advantage of geometric freedom for sliding surfaces, with TriboShield coatings virtually any shape or surface can be coated; helping to improve performance through:

Polymer coatings can be an effective and environmental-friendly solution to replace hard chrome, NMP and PTFS. 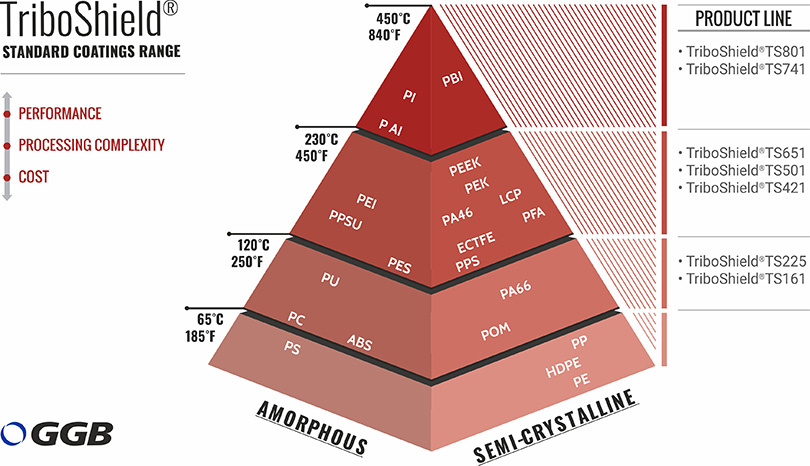 When it comes to working with and enhancing the performance of your existing bearing and polymer coatings solutions, our TriboMate® engineered solutions are specifically designed to be paired up— all leading to enhanced performance. These polymer coating solutions achieve low friction and reduced wear and can enhance the performance of other GGB products when paired either with another coating or with a GGB bearing material and can be an environmental-friendly solution to replace hard chrome, NMP and PTFS.