GGB is helping NASA’s Curiosity rover to explore the surface of the planet Mars. GGB manufactured DU® metal-polymer bearings are critical components in the drill that Curiosity is using to sample rocks in the Martian landscape in temperatures ranging from -54°C to +110°C (-65°F to +230°F).

Compared to the previous Mars rovers, Spirit and Opportunity, the Curiosity rover is twice as long, five times as heavy, and carries ten times the scientific instrumentation. Curiosity, however, has a greater range of exploration.

Engineered and built by NASA’s Jet Propulsion Laboratory in Pasadena, California, Curiosity’s mission is to investigate conditions on the Red Planet to see if they may have been conducive to microbial life. The investigation requires obtaining and analyzing dozens of samples scooped from the ground or drilled from rocks. A robotic arm on Curiosity is capable of drilling into Martian rocks to a depth of one inch (2.5 cm). The drill then acquires samples by rotating and hammering the rocks with weight applied to the bit.

Three DU® metal-polymer bearing segments serve as the primary suspension components for the drill spindle, one of four robust components that allow the drill to operate in the harsh environment on Mars. In addition to the spindle, which rotates the bit, the drill includes a chuck that engages and releases the bit, a percussion mechanism that hammers the bit and a linear translation mechanism.

The high-performance self-lubricating aerospace bearings were used because of their high-wear resistance and broad temperature range, successfully operating in the harsh Martian atmosphere and capable of functioning in extreme temperatures ranging from -328°F (-200°C) to +536°F (+280°C).

In addition to their use on Curiosity, GGB’s DU® self-lubricating bearings are used in a diverse range of industrial applications on Earth, and are well-known for offering excellent low-friction performance and wear resistance in a wide range of loads, speeds and temperatures. 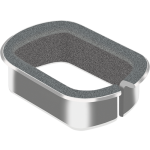